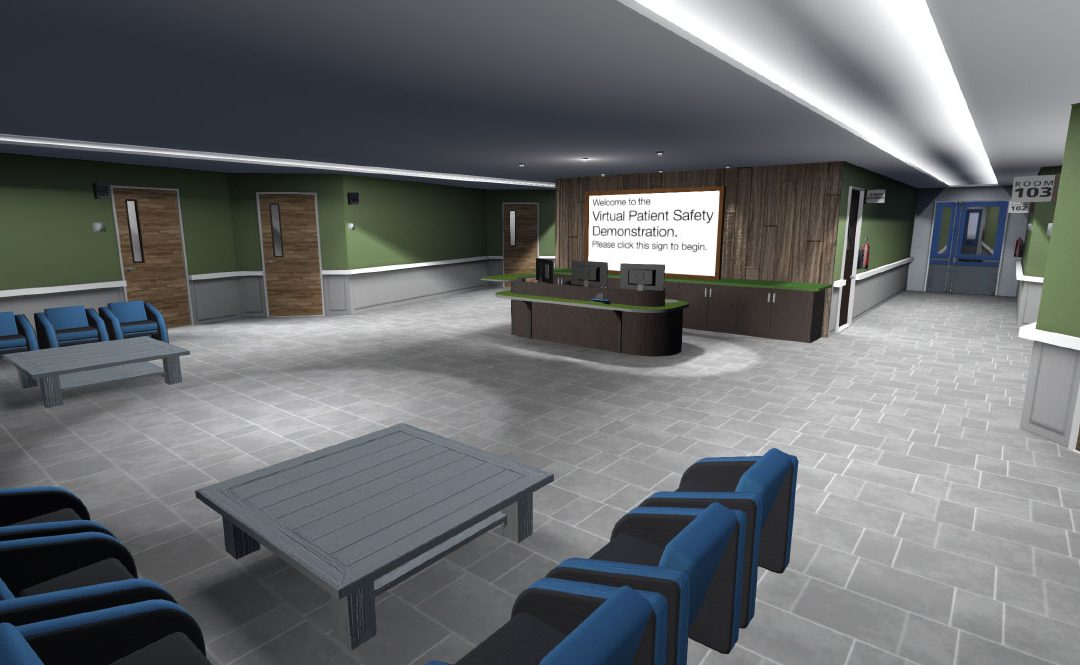 In 2020, as part of my role at Akimeta, I had the opportunity to collaborate with Virtual Ability to develop, from the ground up, a safety demo for their client in the medical training industry.

The client was looking for a demonstration which would help educate and quiz participants on the proper course of action to take in a hospital setting, following a slip & fall accident from a patient, who has mobility issues, getting out of bed.

In this case, it was important for the nurse to assess the situation, what they witnessed of the patient’s fall, understand the proper equipment to use to accomplish the move, then also what course of action should be taken afterward.

We put together a detailed design brief based on the client’s key goals, questions and requirements, breaking down each component in order to develop character designs & models, storyboards, an immersive environment & props, as well as a thoroughly involved amount of scripting which makes use of the most up to date tools offered on the Second Life platform.

As part of the drafting process, we offered three options for each of the three characters to be used in the activity. Our client was given the opportunity to choose from three looks and three hairstyles for each character, as well as give notes (if any) on the stature and clothing being used for each character (gowns, scrubs) at this stage.

We would ultimately settle on some modifications to hairstyle and stature, but allowing these choices early on provided some options when it came down to designing for our audience and situation.

Next, a series of storyboards were drawn up to map out the sequence of events.

We relied on these storyboards heavily when it came time to map out camera angles and shots, the general sequence of events, and animation, and this allowed us to sort out any potential areas that had been overlooked or misunderstood when translating the original outline and reference resources for use in our project.

Development of the ward underwent several iterations – ultimately we settled on a central, symmetrical layout to allow for potential expansion and ease of access. The ward includes ample additional rooms on the left & right to conduct training for other scenarios, a staff lounge, as well as a central area to arrive and congregate prior to participation in the activity.

With the ward built, we could spend some time developing props and activity items which would help make the activity space more believable and immersive.

Based on feedback from our client via Virtual Ability, some modifications were made to the original character designs before any actual 3D modelling occurred.

Additionally, the client suggested that the patient should be caucasian, older, and be a larger person, so a new character design was sketched out to supplement this request.

Once these designs were approved, a fairly extensive rigging process was undertaken to integrate all three characters with our activity objects, as they would all need to move and interact smoothly with various objects as outlined in the storyboard.

Facial rigging was also added to each character’s face to allow for some facial animation at certain points of the activity.

Once all of these parts were completed, they were animated in parts to demonstrate proper Standards of Procedure for getting the patient back in to bed safely.

As these components came close to completion, scripting was the magic to bring them all together in one cohesive whole. Edward Distelhurst of Desolate Studios worked closely with us to develop a system which would coordinate each step of the activity such that all pieces would move or interact in sync and ensure that the viewer’s camera highlighted everything that needed to be seen at the appropriate time.

His work allowed us to encapsulate the whole system in a Heads-up Display to help drive the action of the activity, making interaction with the activity as easy as simple click-thru a quiz for first-time users.